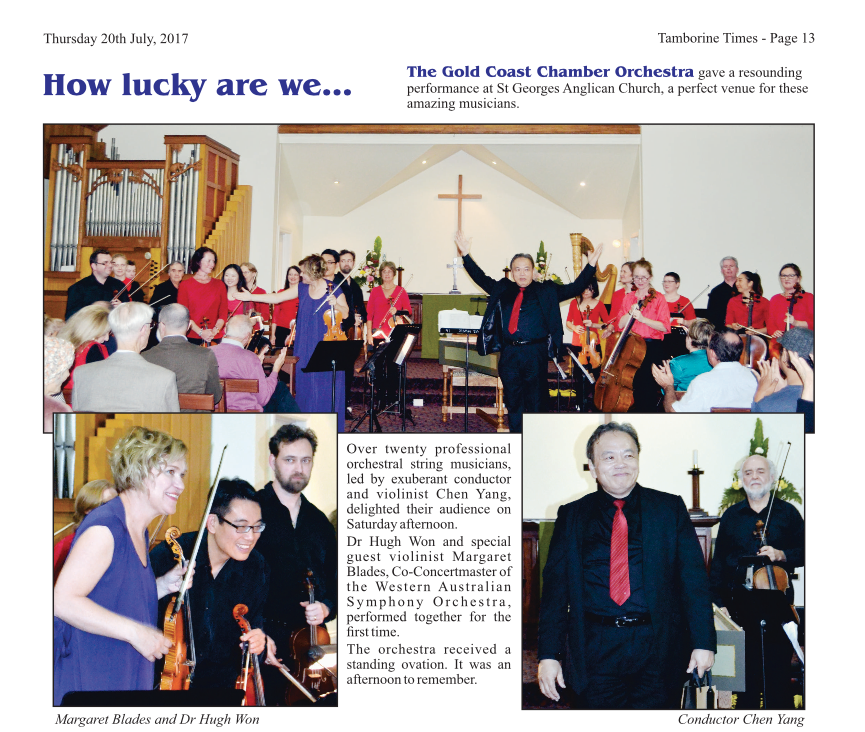 Last night we attended our first concert by the GCCO.
Brilliant, as good as anything we have seen at various venues. Such talented musicians and selection of music. Particularly the J.S.Bach.
Many thanks to all concerned in mounting this wonderful concert.

Thank you for Saturday’s fantastic concert. Wonderful programme. It was superb in every way and the  Bach Concerto couldn’t have been  more expertly played…..amazing Thank you again

Thank you for a most wonderful afternoon of beautiful and sublime music, as members of the local Tamborine Mountain Orchestra we would welcome having you play up here again. We shall spread the word! Your selection of music and ability was very inspiring!

It was a joy to hear the orchestra today.  We had a wonderful time listening the performance of the well-constructed programme.  The richness of sound produced by the orchestra was really quite up-lifting.  Margaret Blades was an exceptional replacement and her skill both with the violin and also as guest concert-master was evident. We sincerely hope that the GCCO will make other visits to the mountain.

Intrigued and excited at the invitation I made the trip to Murwillumbah to experience my first chamber ensemble concert. The performance was entertaining, cheerful and light. The vibrant full sound filled the room taking me on a soulful journey. The diverse repertoire kept me intrigued and entertained. A great experience.

Once again, the Gold Coast Chamber Orchestra has shown us that not all fine music-making is confined to the capital cities. Last Sunday’s concert in Murwillumbah was an artistic success acknowledged by generous applause from an appreciative audience. Grieg’s  popular Holberg Suite opened the program and it was clear from the first movement this string ensemble was in top form under the baton of Camillio Manricks … clean entries, smooth phrasing, admirable dynamic range and solid intonation. Less familiar pieces by Betty Beath and Kurt Atterberg displayed the same attention to detail. Fiddle and viola soloists Nigel Bardsley and Iris Doo produced lovely tone and phrasing in the Atterberg.  Bartok’s Romanian Dances, in an arrangement for chamber strings, was played with appropriate gypsy vigour. The concert finished with Dag Wiren’s Serenade for Strings which, for this reviewer, was the highlight of the afternoon’s offerings … a polished performance indeed!

I got to the Tweed hall just in time for the first piece on Sunday 22nd June and was immediately struck by the high standard of musicianship in the Capriole Suite by Warlock. The orchestra had contrasting dynamics and rhythmic precision making it exciting to listen to. The guest artist – Louise King had a world class stage presence and captivated the whole audience with her showmanship. The Tchaikovsky was sad and moving, but my personal favourite of the whole concert was the Adios Noninos by Piazzolla – inspiring, spine tingling and an amazing variety of colours produced by a single cello!
After an unusual combination of a cello quartet playing an entertaining waltz came the piece de resistance . . . the famous Tchaikovsky Serenade for Strings. I have heard this many times on recordings by world class orchestras, but never played live. I didn’t realise what a technical challenge this music really is until I saw it played before my eyes. There is so much going on at the same time in different sections of the ensemble! And it was delivered in a spectacular fashion by this talented group. At times it was just a whispered long note that grew in harmony that made my hair stand on end, and other times I found my toes tapping to an exhilarating fast movement. The GCCO did Tchaikovsky’s masterpiece justice, and I am grateful that I was able to leave my troubles behind me that afternoon to be transported to another place, even if it was just for a short while.

A wonderful, eclectic mix of music was performed by the Gold Coast Chamber Orchestra on Sunday afternoon, 13 October 2013 at All Saints’ Anglican Church, Murwillumbah. Entitled A Strings Odyssey, the program drew on European dance and folk music, including Bartok’s Rumanian Dances, an Argentinian Tango and Greek Dances by Skalkottas, conducted by the renowned Spiros Rantos. The popular Fantasia on Greensleeves by Vaughan Williams also featured. The talented players produced a crisp, spirited sound, particularly in JS Bach’s Brandenburg Concerto no 4, in which the three soloists were Hugh Won (violin) and Anna Stoddart and Joanna Sullivan (flute). More reflective and lyrical moments came in the Holberg Suite by Edvard Greig. The encore, an exuberant rendition of Strauss’s Pizzicato Polka, ended a well-received and -executed concert, of a standard to match any performed in a major concert centre. The light and airy church with reliable acoustics make it an excellent venue for such a concert, the third to be performed there in the last 12 months, with more planned for the future. The warm welcome of the parish and the involvement of the community made the occasion particularly enjoyable.